There comes a point in every parent’s life where your child grows too big to physically lift them.

But when your child has cerebral palsy, that creates a major challenge. You can no longer help them out of bed and into a wheelchair just by picking them up. Showering and toileting can be back-breaking exercises, and maneuvering limbs in and out of clothes can put a lot of pressure on parents’ own backs and shoulder muscles. 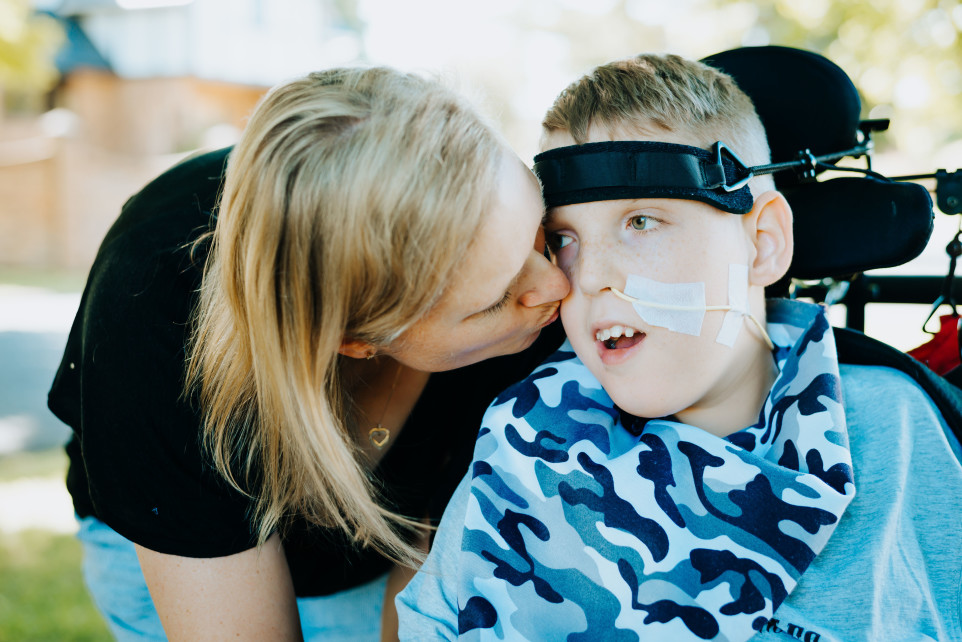 Jordon is 13 years-old and lives in South Auckland with his mum and older brother, Mason. Up until the end of 2020, it would take two people to manually lift Jordon in and out of bed each day. But New Zealand’s nationwide COVID-19 lockdown forced Carla to look at other options.

“We were in a position where we were handling him more frequently. He wasn’t at school, so we didn’t get that physical break during the day. For me, that’s when it became more apparent that my shoulders were really feeling it.”

Initially, the family were given a manual hoist but it was extremely bulky and took up a lot of space in the room. “By the time you added a wheelchair or shower chair, or if there were other people in the room, it was ridiculous,” Carla says.

She set about researching other options and saw a freestanding hoist that was being used in Europe that she liked the look of. “I said to our OT at the time, ‘hey, where can I get this?’ She went through the channels and applied for funding, and the Ministry of Health actually agreed!”

Cubro was then contracted to supply and install a suitable hoist and an Etac Molift Quattro gantry was installed in Jordon’s bedroom in May 2021. The freestanding traverse gantry is supported by four posts (which aren’t fixed to the wall or ceiling). It can hold up to 300kg of weight and operates at the touch of a button – sliding forwards, backwards and sideways, giving full access to the entire room.

The best part is Jordon feels safe and secure and the family can position the hoist exactly where they want. “The other type of hoist that we did have, you couldn’t do that. Jordon had to hang in his sling for some time while you pulled a chair out and put the other chair in, whereas this is really effortless and easy.”

Carla says she was impressed by the installation service Cubro provided and describes Equipment Specialist Garry Stanners as “quite a perfectionist”.

“I’ve dealt with Cubro through our Occupational Therapists, and they’re a fantastic company to deal with. I generally choose them over other companies because I feel that their product is far superior. All their gear is hard wearing. For me, I like to have something solid and stable for Jordon, because as he gets heavier and older stability and security for the person using the equipment will become more and more important.”

The new lifter has also made life easier for Carla and Jordon’s older brother who is no longer required to help lift him in and out of bed. “It was always ‘Mason, I need your help' and the overhead hoist has really eased that pressure off so he’s just able to be a normal teenager."

“It has really eased that pressure off so he’s just able to be a normal teenager."

“Our caregiver is able to provide for all of Jordon’s needs while I’m working or outside of the family home for a few hours thanks to this amazing hoist. It gives me peace of mind knowing that Jordon is really safe and secure. A huge thanks to our OT and Cubro, we are so delighted.”

If you would like to find out more about our overhead lifting solutions, please get in touch with our team on 0800 656 527 or email [email protected]

Cubro case studies are based on actual testimonials provided by real customers and users of our solutions.  In some testimonials to protect the identity of the users, we have changed a name and used a stock photo. Our case studies describe our past work with customers and users, and detail solutions that have improved their quality of life. As each individual user has a unique set of needs and requirements, the content in these case studies should not be used as a substitute for professional advice from a registered clinician.
Back

Thanks for your enquiry. So that we can help you faster,
please let us know who you are:

Are you a current Cubro customer working in an Aged Care facility; Public or private hospital;
Or an Occupational Therapist or Physiotherapist?

If so, please click the button below and use your login to sign in.
If you don’t have a login, please complete the sign up form and we’ll set one up for you.

Are you looking to purchase some equipment for yourself or a family member?

If so, you can contact your nearest Cubro retail partner to purchase our equipment solutions through their stores. Click the button below to find a retail partner near you

Find a Cubro stockist near you

If you need help, please get in touch and we will point you in the right direction.

Your session is busy

You currently have items in a draft quote for this facility. Once you have finished your current quote, change facility and you will be able to start a new quote.

Want to see more? Our resources section is exclusively available to Cubro customers. If you are an existing or new customer, please create a login so you can enjoy browsing our helpful resources.